A little bit behind, but back on track again :o)

I haven't been sewing or quilting much the last week. Spent most of the days on the couch because the darn migraine came to stay for a while.
I have a couple of quilts to quilt on my longarm, but need to be a bit better before I start working on them.
I discovered some fun stuff happening on Facebook, and I decided to join the The 2014 'It's a New Year Sewalong hosted by The SewCanShe Sewcalites.
The fun is happening on The SewCanShe Sewcalites' facebookpage.

I haven't made many log cabin blocks before, so I don't know the "right" way to do this other than cutting and piecing with accuracy. I figured I should try a few blocks to see what they look like with the fabrics I chose.
Cut some of the fabrics, and all of them are scraps from different lines by Bonnie & Camille. 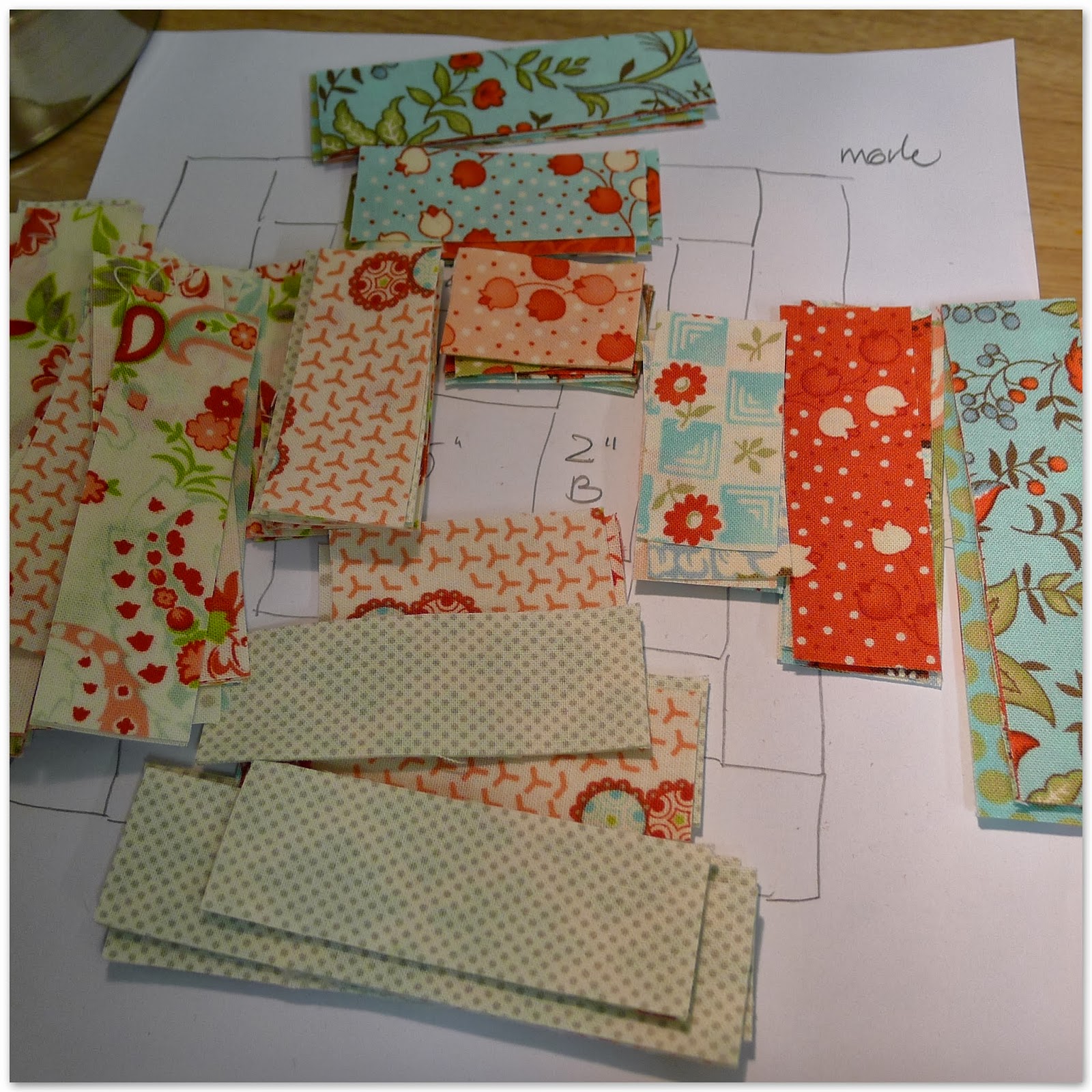 The blocks are only 4" finished, so pretty tiny. Not sure I like them, since the light fabrics are a bit too busy. I might give it another try using white solid instead. I guess I'll make a table runner of these blocks, since I need a new one anyway. 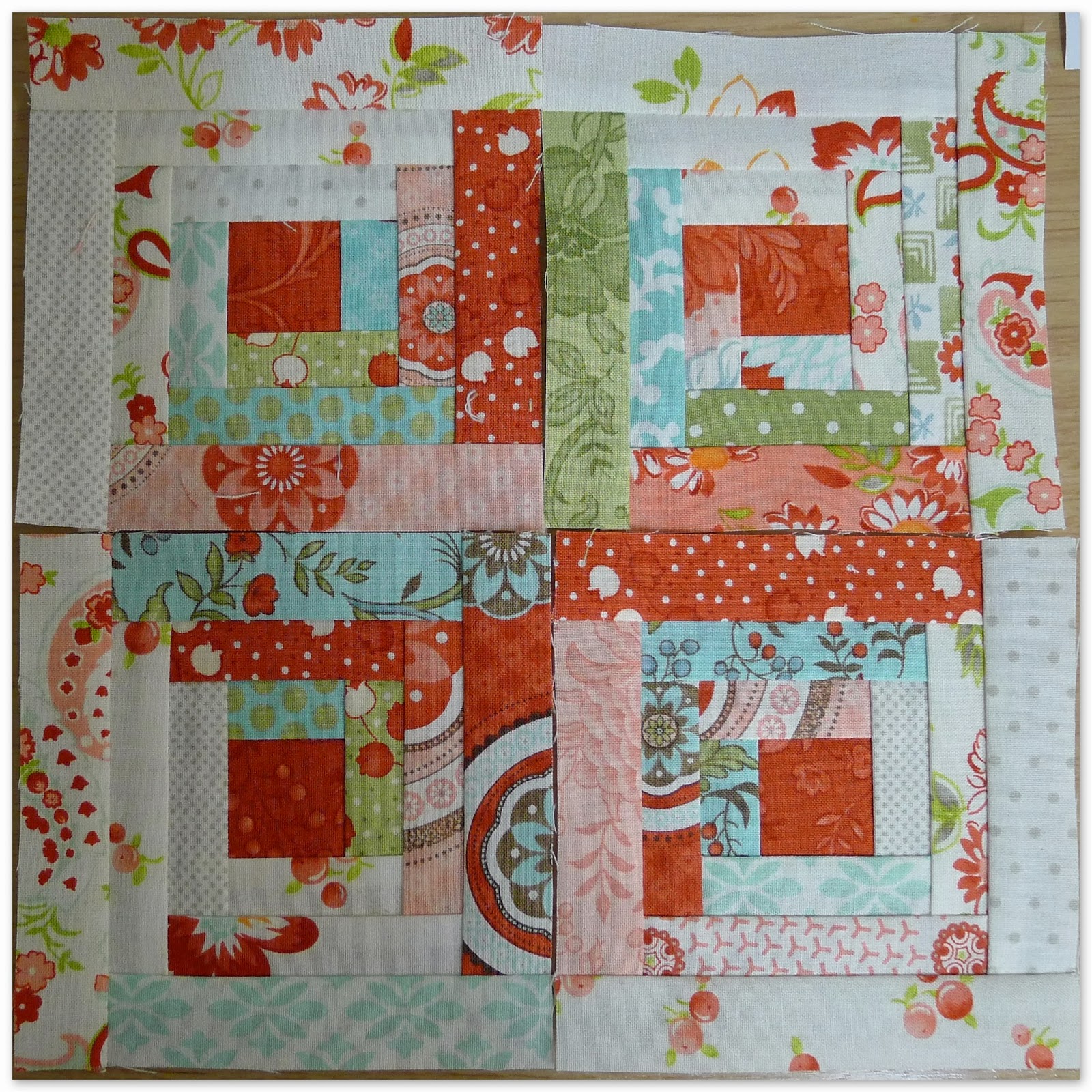 A while before we moved, our furball did dissapear. We have been looking for him for months, and our old neighbors have been looking for him too. But he is not been seen. We miss him a lot, and I still have a little hope he'll be back. The whole family missed a cat so much, we decided to get a kitten. But since our twins insisted we should have twins, we ended up getting two. My brother saw them on a local facebook page and gave me a hint about kittens that needed a new home. They came to live with us on Tuesday, but looks like they are pretty comfy in their new home now:-)

Say 'Hello' to our two furball babies, Suzu and Nano: 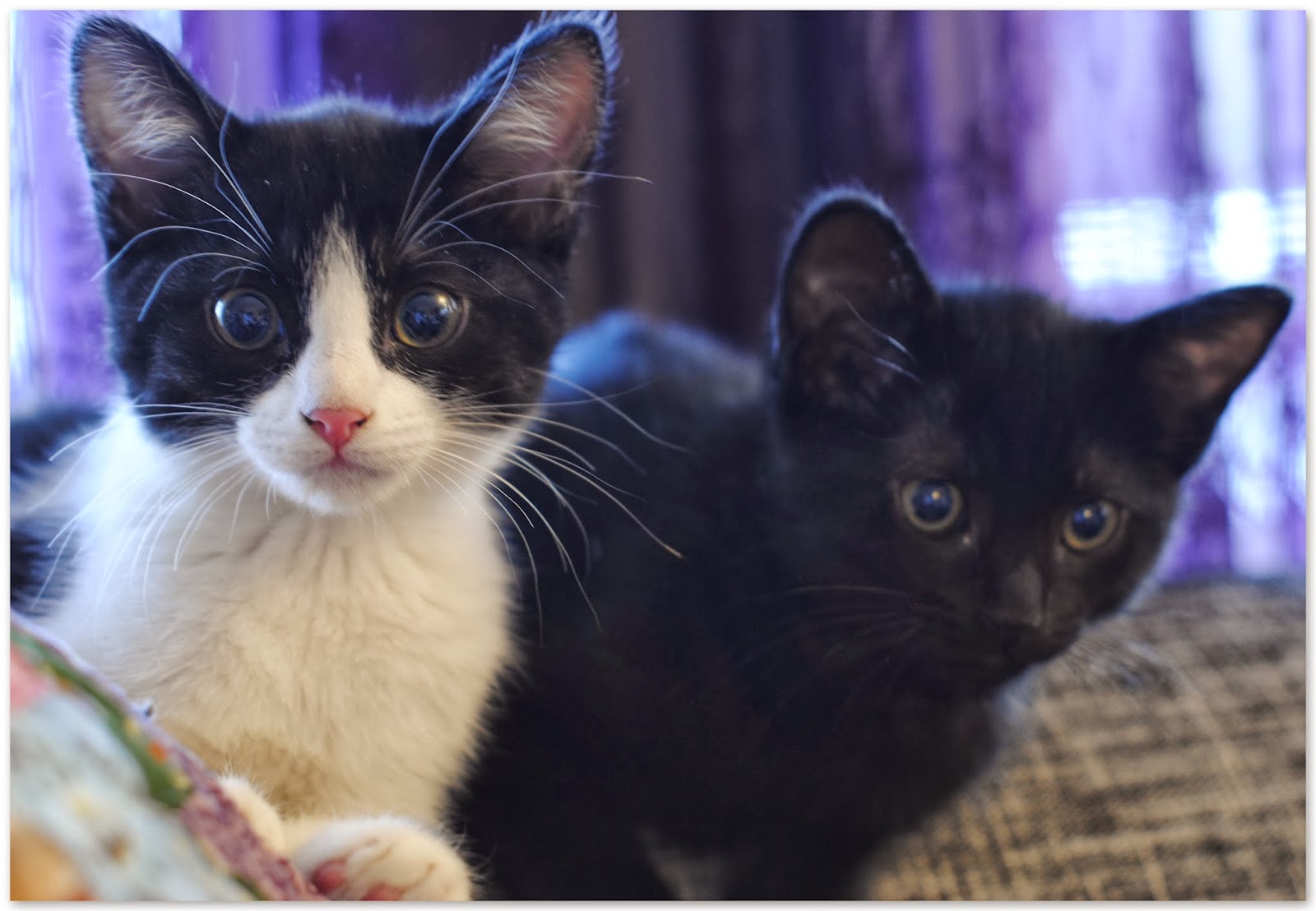 Suzu and Nano are both girls, and they are super cute, but a couple of rugrats :o)
They are running and playing like crazy, then they come to cuddle and sleep to charge up to play again :o) Not easy to capture a photo of them while they are awake, but DS1 captured these two photos of them. 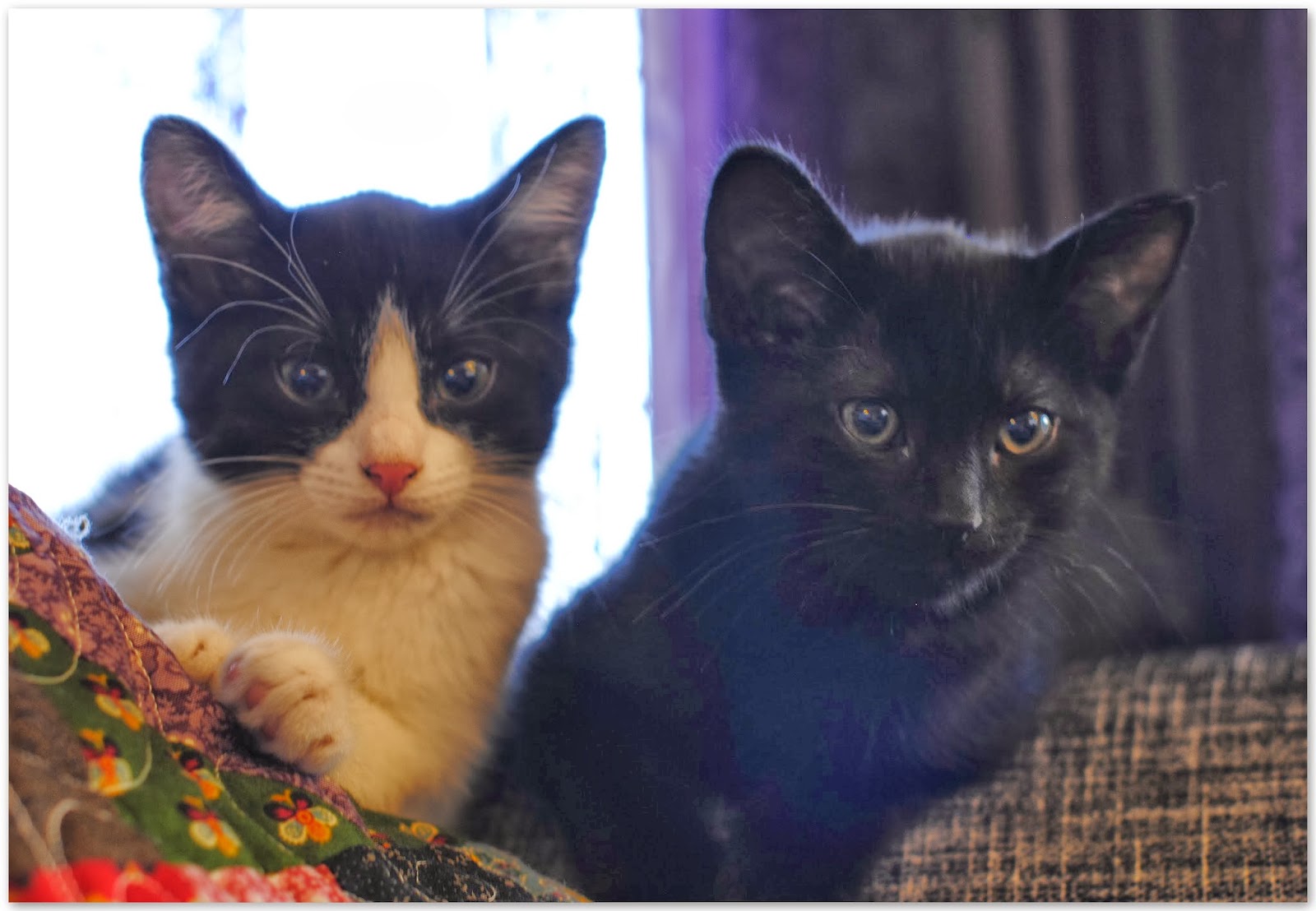 It's not hard to capture a photo of them sleeping, though :-) Looks like they have adopted my quilt, because they come to use it as a bed when they're sleepy, which is fine by me :o) 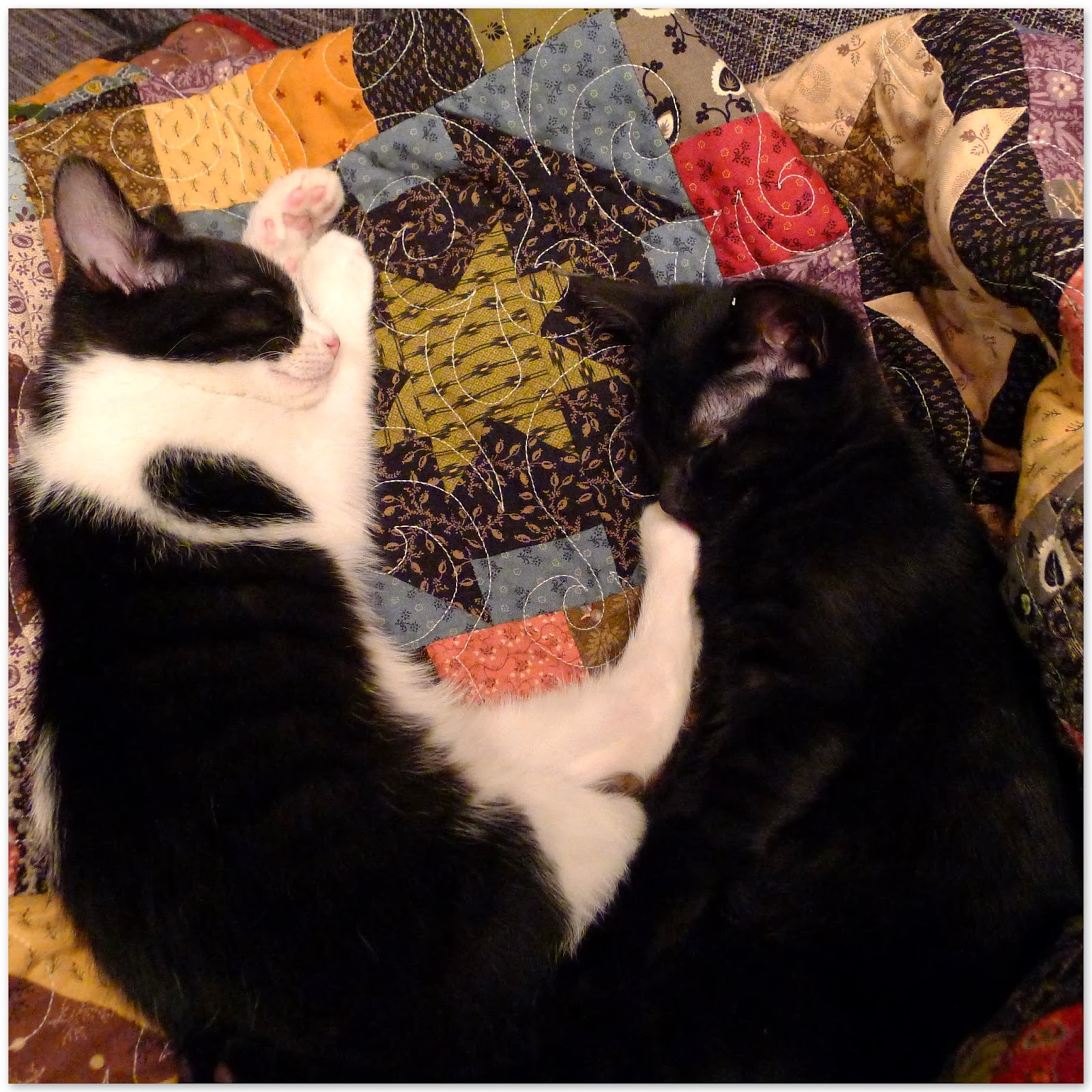 I hope to do some more sewing and quilting during the weekend. I have finished the binding on my last quilt, and will share some photos tomorrow if the light is good and I get to take a few photos of it.

Wish you all a great weekend,
Laila
Posted by Litamora's Quilt & Design at 10:20 PM

Great blocks and very cute kittens! I think the quilt they are sleeping on, is very lovely. :)

Purr-Hello cute kitties;o) Suzu and Nano look so happy and relaxed on your gorgeous quilt! Hopefully your migraine is over and you are able properly enjoy your quilting weekend!

The kittens are gorgeous! And I like your log cabin blocks in the lovely, bright colours! Thanks a lot for the nice comment on my blog :)

Litamora's Quilt & Design
I am 47 years old, engaged and mom to three boys. Crazy about patchwork and quilting and I became a fabric addict in June 2004